It is the year 1077 and Jan Skopek is awarded the castle of Szigovitz, by King (Saint) Ladislaus I. The castle is situated in what is today the Czech republic and he is rewarded for his faithful services. Jan’s family lives contended in the Bohemian Kingdom until 1240, when every family member residing in the castle is killed by the invading Mongols. Two family members, however, survived who are monks and lived far away from home. As unusual times demand unusual deeds, following the massacre these young monks are permitted to leave the monastery and get married to assure their family’s survival.

Later we meet Jan Skop. The time is now 1334 and Jan is administrator in the court of the Duke of Wroclaw (today part of Poland). He has a son, Bogislav, who is credited with saving the King of Hungary, Louis I. “the Great” from being kidnapped and is rewarded with the castle of Bellohrad for his services. The sons of Bogislav likewise became soldiers and they too excelled in their profession. With time each becomes commanding officer of a major town; one in Wroclaw (now Poland), the other in Těšín (present day Czech Republic) and the third in Eger, Hungary.

Stanislav is reported to receive four villages in Silesia from the Duke and settles down in one of them, named Tošanovice. This place is located in present day Czech Republic. He is noted for his interest in travel, travels he had done often and for far. He earns the nickname “Tluk”, meaning “itinerant” or “well travelled” (te se mnoho po svete tlukl). His descendants inherited this designation and became known as the Tluk from Tošanovice (Tluk de Toschanovitz).

History informs us that of the grandsons of Stanislav Tluk, one named Zigmund, stays with his family in Silesia while the other, whose name is Melchior, shows up in the Hungarian Kingdom. Next we know is that he is being rewarded for his services with four villages in Spiš (Szepes in Hungarian) County. This area of the former Hungary now belongs to Slovakia and Poland. He chooses to make his residence in a village called Dravecz (that is today named Dravce in Slovak). He hereby becomes known as “Melchior of Dravecz” or Melichar Draveczky in Slovak.

The Dravecky family took good care of their fortune and managed to add to it. They acquired additional land in other counties of the kingdom, mainly in Spiš, Zemplén, Bihar, and Ungvar. Several members of the younger set moved to and settled on these newly acquired lands. One of the most successful Draveckys is Laszlo IV. who was a landholder in the counties of Zemplén and Bihar and a very brave officer in the Hungarian Army. Another distinguished family member was Gabriel Draveczky from Spiš county. He was also a soldier and as such, after proving his loyalty to the Crown, was recognized by Queen Maria Teresa and was bestowed the title of Baron. 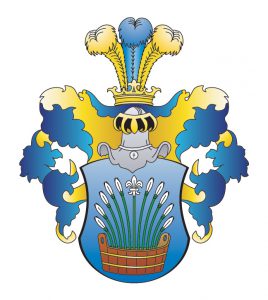 The coat of arm presented here is based on representations encountered in old German and Hungarian books. It too is based on the Tluk family’s coat of arm. We assume that the colors shown here approximate those of the original. However, since color depictions in old representations are of rather low quality, exact reproduction of colors involves guesswork. It is rumored that the “true colors” are found in the Dravecky Family Book. As the whereabouts of this legendary book is unknown – and locating it is a much desired event – in the interim we have to settle on color designs based on informed guess.

Most Dravecky families today live in Slovakia and Hungary. Those who live in Slovakia have, by the most part, changed their name from Draveczky to Dravecky. This occurred mostly in the period following WW1 and reflects Slovak usage. We have come across with the following spellings of our name: Dravecky, Dravecký, Dravecki, Draveczky, Dráveczky, Draveczki, Dravetzky and Dravetzki.

As far as we know, there are no contacts between the Draveckys who live widely dispersed, and in various counties of the former Hungarian Kingdom. It is hoped, that this project will serve as a modest instrument of reconnection between them.

If your, or your mother’s, or your spouse’s name is Dravecky (in any of its forms), you may apply for the Dravecky.org email address. Both email redirection (i.e. keeping your current address and having emails redirected to it) and full POP3 email account options are available. This service is free of charge.

We are interested in your thoughts and opinions regarding this project..

If your name is Dravecky (or any of its forms), we would like to hear from you. Join us in exploring our common heritage. Please do contact us. Thank you.